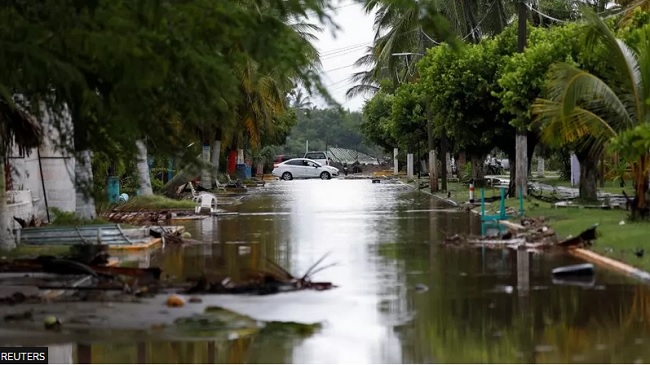 Two people died on Sunday from the destruction caused by Tropical Storm Roslyn after it made landfall along Mexico’s Pacific coast as a powerful hurricane before weakening farther inland, authorities said.

A 74-year-old man was killed in the town of Mexcaltitan de Santiago Ixcuintla when a beam fell on his head, Nayarit state’s Ministry of Security and Citizen Protection told Reuters. A 39-year-old woman died when a fence collapsed in the state’s Rosamorada district.

According to the U.S. National Hurricane Center (NHC), Roslyn hit land as a Category 3 hurricane at 5:20 a.m. local time (1120 GMT) near Santa Cruz in northern Nayarit, a Pacific coastal state home to popular tourist beaches like Sayulita and Punta Mita.

By the afternoon, Roslyn was downgraded to a tropical storm with maximum sustained winds decreasing to near 45 miles per hour (75 km per hour), the NHC said.

Roslyn was forecast to become a tropical depression by Sunday evening and dissipate overnight or early Monday.

Images from Nayarit after Roslyn made landfall showed cars submerged in water and homes with major damage to roofs and outdoor coverings. Emergency officials were dispatched to the most affected areas, the state’s civil security agency said on Twitter.

Only minor damage was reported in neighboring Jalisco, according to the state’s governor. The busy international Puerto Vallarta airport resumed all operations.

Some people who evacuated had returned to their homes. Officials were working to restore power in areas that experienced outages.

Beaches along the coast remained closed. The NHC warned of swells that were “likely to cause life-threatening surf and rip current conditions.”

Heavy rainfall was expected to continue in some areas of the storm’s path, the NHC said. Rain could lead to flash flooding and landslides in areas of rugged terrain, the center warned.