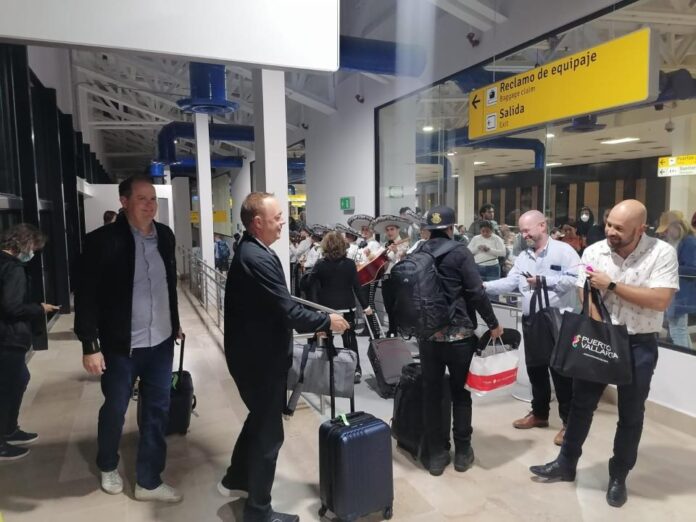 The air connection of this tourist destination continues to grow, since this Tuesday the inaugural flight of the route from Vancouver, Canada-Puerto Vallarta, of the Flair airline, took place.

The flight arrived after half past eight at night with 189 passengers on board, for which they were received by authorities from the tourism sector and mariachi, in addition, they were given a welcome kit.

It is worth mentioning that this flight will be arriving on Tuesdays and Thursdays. In this sense, Luis Villaseñor Nolasco, director of the Puerto Vallarta Tourism Trust, announced that starting in December it will increase to four weekly.

Meanwhile, another one will arrive on November 2, but from Edmonton, Canada on the same airline with two other weekly flights; that is, an average of 1,500 seats per month will be offered.

On behalf of the airline, the executives commented that they are very happy with this new flight since Canadians love to travel to Puerto Vallarta and Riviera Nayarit. Likewise, it is already snowing and running from the frigid weather; and what better way to spend a pleasant vacation than in these destinations.

In addition to this, they expect the flights to have a minimum capacity of 80% since this first flight was full and additionally, more than 150 passengers left Puerto Vallarta for Canada.

Flair Airlines is Canada’s leading ultra-low-cost independent airline, which began operations in 2017, becoming a pioneering airline for its ambitious and rapid expansion to make travel more accessible, affordable, and exciting for everyone. world.

The Canadian low-cost airline Flair Airlines announced that it plans to increase its capacity by 50% during the summer of 2023. The company expects to incorporate seven new aircraft, thus reaching a total of twenty-seven in operation, by the middle of next year.

The increase in the fleet will make it possible to draw up an initial schedule that will include increased frequencies on 41 of its routes during the summer season next year. 4.2 million seats are already available through the airline’s different official sales channels.

“We anticipate another very busy summer next year and have increased our capacity significantly to meet the growing demand,” said Garth Lund, Flair Airlines’ chief commercial officer. “The addition of seven additional aircraft
to our fleet will allow us to increase frequencies on our busiest routes and offer more options to passengers,” he explained.

As reported by the company through a press release, the new aircraft will generate some 350 new jobs, both for ground and flight personnel, at all its bases in Canada.

According to available data consulted today through the same platform, the company scheduled a total of 3,022 flights and 571,158 seats in June 2023. The figure represents an increase of 47%, both in the number of services and seats available.

Finally, Flair Airlines plans to operate 3,320 flights during August 2023 and offer 627,480 seats. Compared to the same month this year, the figures represent an increase of 37% and 35%, respectively.

On the other hand, Flair Airlines will increase its flights between Montreal (YUL) and Toronto-Pearson (YYZ) by eight weekly frequencies to reach a total of twelve. Connections to Deer Lake (YDF) and Nashville (BNA) will also increase.

In addition, the airline will offer new destinations in Mexico during the boreal summer of next year. In July 2023, Flair Airlines will fly from Vancouver (YVR) to Los Cabos (SJD) and Puerto Vallarta (PVR), in the Mexican Pacific.

During the upcoming winter, Flair Airlines will increase its offer in Mexico by adding new frequencies and a new non-stop service between Toronto (YYZ) and Cancun (CUN). Additionally, it will relocate its operations from Hollywood Burbank Airport (BUR) to Los Angeles International Airport (LAX) beginning October 31.

“We are delighted to add an additional route to our network in Mexico. We know Canadians will be looking to beat the winter blues by escaping to Cancun’s sandy beaches, and we’ve added additional service to the airport to allow people to affordably chase the sun,” said Stephen Jones, CEO of Flair Airlines. .

“As we continue our growth in the Mexican market, we expect to increase frequencies on our routes and add new destinations. We can’t wait to be a part of your next sunny vacation,” added Jones.

Greater vacation offer from Mexico for this winter

The flights will be operated on Boeing 737-800 Next Generation aircraft and promotional fares start at CAD 109 each way.

In Los Cabos (SJD), the company will increase its operation from Vancouver (YVR) from 2 to 3 flights per week operated on Boeing 737 MAX 200, in addition to its routes to Abbotsford (YXX) and Edmonton (YEG).

In addition, it will increase its services from Vancouver (YVR) to Puerto Vallarta, going from a weekly frequency to 4 operated on Boeing 737 MAX 8, complementing its route from Edmonton (YEG).

New destination in the United States

Another change to Flair’s schedule this winter is the move of operations from Burbank – Hollywood (BUR) to Los Angeles (LAX). Service to LAX begins October 31 from Edmonton (YEG) with three weekly flights and November 1 from Vancouver (YVR) operating four times weekly. Promotional fares on both routes are available from CAD 99 each way.

“We are delighted to have secured gate availability at LAX’s spectacular new Tom Bradley International Terminal. We are confident that our LAX service will resonate well with our customers and we look forward to increasing our capacity in the market starting this winter,” said Jones.