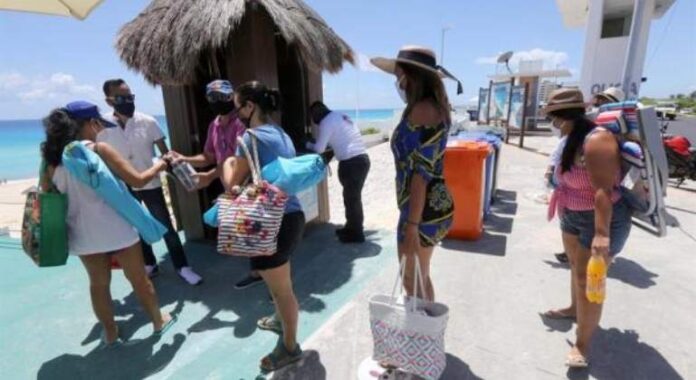 Nayarit and Quintana Roo registered the highest growth rates of the ITAEE in the period January-September 2021.

At the end of the third quarter of 2021, the tourist states of the country registered the highest growth rates in their economic activity, after the ravages they suffered from the Covid-19 pandemic.

After decreeing the national day of healthy distance in the months of April and May 2020, which resulted in total confinement and stoppage of non-essential activities to prevent the spread of the virus, tourism was the sector most affected by the health contingency.

Although last year the entities that depend the most on tourism showed signs of recovery, they have not yet reached pre-pandemic levels.

According to seasonally adjusted data from the National Institute of Statistics and Geography (Inegi), the largest annual increases in the Quarterly Indicator of State Economic Activity (ITAEE) during the period January-September 2021 were observed in Nayarit (15.9%), Quintana Roo (12.2%), Baja California (11.3%), Guerrero (11.2%) and Baja California Sur (11.0 percent).

While with the entities that were located between variations below 7% and above 4% were Durango, San Luis Potosí, Zacatecas, Hidalgo, Sonora, Tlaxcala, Colima, Puebla, Tamaulipas, Veracruz and Sinaloa.

Meanwhile, the lowest growth rates for the ITAEE were in Michoacán (3.9%), Morelos (3.1%) and Mexico City (2.3%); Campeche was the only state that presented a drop in its economic activity, of -3.0%, due to the collapse of its mining industry (-0.6 percent).

The above results show that due to the economic contraction in 2020, giving a low statistical basis for comparison, tourism entities obtained high growth rates for their economy, reflecting double-digit variations in tertiary activities.

However, in relation to the ITAEE of the first three quarters of 2019, prior to the pandemic, only eight states presented increases, that is, they managed to compensate the losses caused by Covid-19.

At the other extreme, the most pronounced decreases –and which are further from pre-pandemic levels– occurred in Quintana Roo (-18.6%) and Baja California Sur (-17.9%), the two main tourist engines in the national territory; this means that the dynamism of these entities in 2021 is still insufficient.

In the short term, Quintana Roo led the country’s economic growth, increasing its ITAEE by 7.45% in the third quarter of 2021 compared to the previous quarter, with seasonal adjustment, due to the recovery process that tourism is experiencing.

The top 3 was completed by Tabasco (4.43%) and Tlaxcala (3.92%); In total, 17 of 32 entities exhibited quarterly increases in their economic activity.

Quintana Roo led the country’s economic growth, increasing its ITAEE by 7.45% in the third quarter of 2021 compared to the previous quarter.