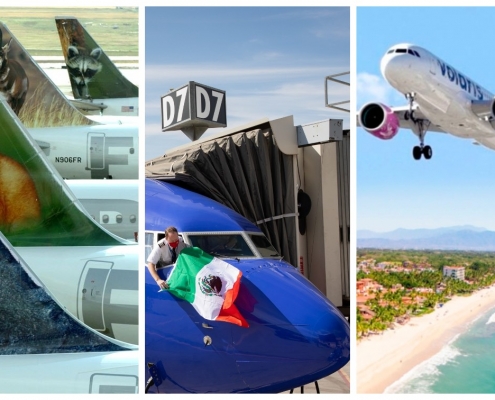 In the face of growing demand from American travelers, airlines have started operating routes that are generally active only in winter.

Banderas Bay.- US airlines have begun to operate flights to the Puerto Vallarta-Riviera Nayarit region on routes that are traditionally winters, such as Alaska Airlines and Delta Airlines and their flights from Portland, Seattle, and Salt Lake City.

Although May is a month in which the air flow generally decreases (prior to the summer season), this time an atypical situation is occurring with an increase in the number of flights compared to last month, according to the data issued by Grupo Aeroportuario del Pacífico (GAP).

The operator of the Puerto Vallarta International Airport “Licenciado Gustavo Díaz Ordaz” (PVR) reported that 14 airlines will be flying to the region that will make an average of 47 flights per day, for a total of 1,474 flights during the month.

This is the result of an announcement recently issued by the Centers for Disease Control and Prevention of the United States, in the sense that US citizens who have already received the two doses of vaccine against Covid-19 will be able to include the trips on your to-do list. To date, more than 53% of the population has already received at least one dose, a percentage only surpassed by Israel and the United Kingdom. “Given that the United States is very advanced in its vaccination process, what we are now seeing is that some airlines are beginning to operate routes that are generally active only in the winter, “said Marc Murphy, general director of the Riviera Nayarit Convention and Visitors Bureau (OVC).

As of May, United and Alaska remain the airlines with the most flights to this region, averaging 28 and 64 a week, respectively. While on the national scene, the Aeroméxico / Aerolitoral duo maintains supremacy, with 44 flights per week on average.

As of Sunday, May 2, Viva Aerobus began operating the Ciudad Juárez-PVR / Riviera Nayarit route, with two frequencies a week (Thursday and Sunday), in what will be a non-stop flight with one duration of 2 hours and 10 minutes.

Previously, those who traveled to this destination from Ciudad Juárez had to make a stopover in Guadalajara, Monterrey, or Mexico City, taking up to a day.

Air activity has had ups and downs since commercial airlines resumed their services in June last year, at the end of the first phase of the health contingency due to the COVID-19 pandemic. On that date, only 11 companies restarted their flights to the region. Riviera Nayarit resumed its tourist activities in the first days of June 2020 and has gradually increased its occupancy since then. Currently, the percentage of occupancy allowed by the federal and state health authorities is 70%.

It is important to reiterate that the conditions of sanitary security for tourists are guaranteed. Both the airport and the airlines are following protocols and sanitary measures endorsed by state, national and international authorities to prevent possible COVID-19 infections.