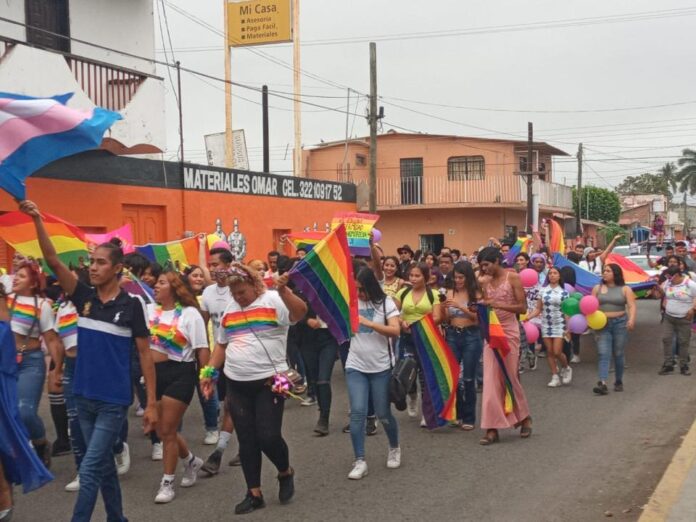 A contingent of about 200 people gathered at the Glorieta del Indio to start the gay pride parade, the first in Bahía de Banderas and in the state of Nayarit; with the aim of setting a precedent of visibility in the municipality and asking that their rights be respected, as well as that they be taken into account in government decisions.

After 6:00 pm this Friday, the Los Indios roundabout, where the march started, was filled with colors, with floats, drag queens, banners and colored balloons. The continent did not leave without first painting the pedestrian crossing of the roundabout with colors, organizing and lining up their vehicles to leave for the public square of El Porvenir.

With electronic music and dances, they headed down Yucatán street in San José del Valle, before the astonished gaze of the inhabitants, who came out of their houses surprised and caught the party, in which authorities from the municipal DIF were present, the Municipal Human Rights Commission, City Hall staff, groups, members of the LGBT+ community.

To then join the street 12 de Octubre in El Porvenir and arrive at the public square around 8:00 pm where the president of the DIF System, Perla Yadira Villalvazo, was crowned as the queen of the march, as well as He read the petition document in which the request was made to the Government of Bahía de Banderas, the opening of an inclusion directorate, with an honorary position.

The foregoing, so that any violation of their rights is addressed and they are attended to in a specialized manner and by members of the community. It was announced that this march is intended to be held annually, all this as part of the gay pride month that is celebrated on June 28 and other commemorative dates during the month.