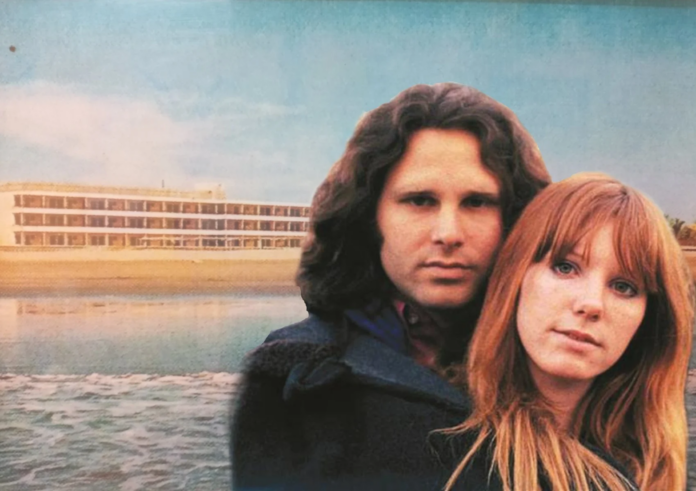 The Playa Hermosa hotel was created to give unlimited pleasure to the rich and famous of the world, but a series of situations made it seem as if something or someone refused that this place of excesses existed.

One day in 1969, Jim Morrison arrived at the Playa Hermosa hotel with the beautiful muse Pamela Susan Courson lodged inside his head. He locked himself in one of the 100 rooms that the hostel had, in order to write the iconic song of The Doors : LA Woman.

There is no documentary evidence of the following, but if things are as the testimonies of that time narrate, while The Poet of Chaos composed the piece for the angelic Pamela, he would have self- flagellated with slaps and several slaps on the back of the neck, arms and legs, in search of finishing off the gnats that were flying around his body trying to feed on some of his blood.

Miguel Alemán fled from the bites of gnats

Jim Morrison would not be the only famous victim of those insects similar to mosquitoes with which this Nayarit Inn was infested. Just 18 years earlier, in 1951, the president of Mexico, Miguel Alemán, fled from those insects that pecked him without regard for his investiture. He only stayed long enough to inaugurate the complex’s facilities and then hurried away with flushed skin.

We do not know if the incident with President Alemán was taken as a bad omen by the owners of the Playa Hermosa, about whom there is certainly no record. Although the few years of glory that the inn had were really great, because after all, its luxury facilities, in addition to the private beach, compensated for the bites of annoying insects.

Elizabeth Taylor made Playa Hermosa part of her idyll

From the first days of its opening, the hotel had within it a parade of Hollywood celebrities. Elizabeth Taylor and her husband Richard Burton,  were some of the personalities who spent many idyllic nights of passion inside their rooms. When they left, they enjoyed the ecstatic sea breeze from Borrego beach, San Blas, where the venue was established.

The American actor Lee Marvin lived in Playa Hermosa for several moments with his girlfriends, walking and fishing in the place. Mexican celebrities of the moment also saw in this hotel the perfect place to indulge their passions. Among the most remembered are Lola Beltrán , Andrés García , Jorge Rivero and Silvia Pinal .

But if the gnats failed to dissuade the eccentric walkers who came and went, fate did. It turns out that around 1968 the sea mysteriously receded some 500 meters from the hotel, taking away much of the wonderful tourist magnetism it possessed. The venue went out of business almost overnight, closing its doors shortly after Jim Morrison took up residence.

After closing it was fenced to prevent explorers from entering it. In the 1990s it was the location for a Mexican movie called Playa Azul, which narrates the life of a Mexican politician in decline. The deterioration of the property can already be seen in the film, although what ended up ruining it was Hurricane Kenna in 2002.

From exclusive tourism to dark tourism

Currently, the Playa Hermosa hotel lies in ruins, full of saltpeter, with walls and ceilings about to collapse. It receives visits from Mexican and foreign tourists equipped with a lot of repellent, who are looking for any trace of Morrison, or the celebrities who once stayed there. Or perhaps they also seek to feel the nostalgia of the past that they did not have to witness.