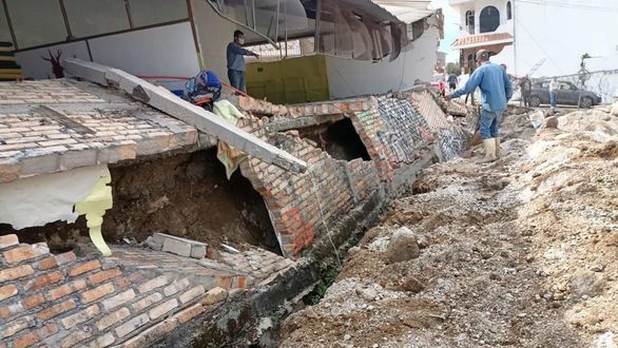 A wall of the “Estrella de Mar” nursery of the Mexican Institute of Social Security (IMSS) collapsed on Thursday, February 3, in the municipality of Tepic, Nayarit. The accident left a teacher and at least seven minors injured, reported the state Secretary of Public Security.

According to the authorities, the case was reported to the emergency number, therefore, support was provided in the nursery, located in the Las Brisas subdivision.

Preliminary reports from Civil Protection indicated that, as a result of construction work on adjoining property, the fence collapsed and caused damage to the minors inside the daycare.

The state government reported that the minors were transferred to the IMSS clinic number 1 in Tepic, where they received medical attention and it was ruled out that any of them suffered major damage.

Agents of State Security and Civil Protection cordoned off the area and began with expert reports to determine the causes of the collapse.

The Social Security delegate, Jorge Martínez, reported that 57 minors were in the nursery at the time of the collapse and that, moments later, they were handed over to their families.
Martinez said that the person who allowed the construction next to the nursery will be investigated.

For his part, the state governor, Miguel Ángel Navarro, announced that whoever is responsible for this accident will be held accountable.

The investigations continue and the nursery is guarded by elements of the state police to avoid major accidents. Meanwhile, two people have been detained: the expert and the engineer of the adjoining work, in order to determine responsibilities.

Likewise, revisions were initiated in all the nurseries in the state in order to certify and document that they comply with the necessary security measures.

The investigation will cover from the person who authorized the permit to build, since it is prohibited to build next to a nursery, and if there were complaints of these events, as the inhabitants of the area assure.