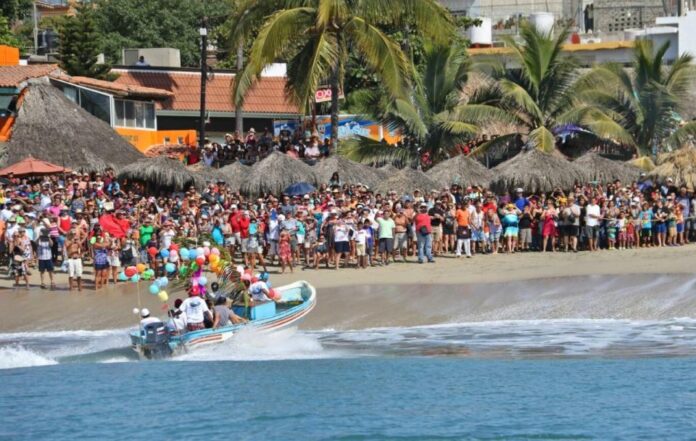 On these dates, through an official letter addressed to the organizing committee of the festivities in honor of the Virgen de la Paz, patron saint of that community, the parish priest was informed about the suspension of the patron saint festivities of Bucerías that take place every year from 16 from January to February 24.

This celebration unites two communities, such as Bucerías and the Cruz de Huanacaxtle, since among them one of the most original pilgrimages in the region is carried out between the people of the two towns, such as the parade of pangas and yachts, which is said to have more of 60 years of tradition and where the foreign community also joins.

It is also a tradition the pilgrimages that equally cover the streets surrounding the temple with color and joy that receive them to the ringing of the bells to celebrate the arrival of the faithful pilgrims.

To be practically the date of the great celebration, the streets look like any other day of the year only a little confetti on the sides of the temple and just a few decorations have been placed.

In the same way, the square looks normal only with the presence of national and foreign tourists who do not know the celebrations walk calmly through these streets among the food and craft stalls and the locals who at this time should be celebrating the patron saint of fishermen. and oysters.

In this sense, the Catholic community will continue with the Eucharistic celebration with mass at dawn and in the afternoon at six without pilgrimages.