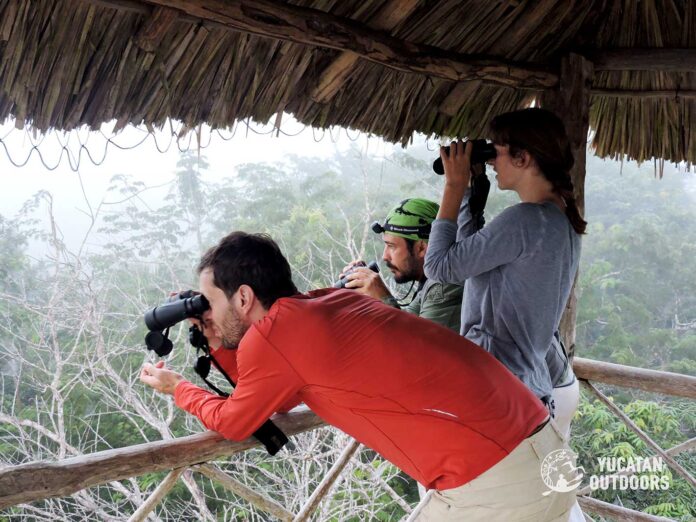 Yucatan, BC, BCS, Quintana Roo, and Bahía de Banderas are the most important birdwatching regions in the country and with the greatest presence of foreign visitors

The Yucatan Peninsula is recognized as a very important area with an enormous diverse bird population due to its strategic location for migratory birds.  Too there is a rich resident population.

To date, 543 species have been viewed in the Yucatan Peninsula, representing nearly 50% of all the bird species registered in the country.

55.3 percent of the bird watchers who observed aquatic and marine birds in the country in 2019 were Mexican and 44.7 percent were foreigners, however, in three of the most important regions for the observation of these birds, such as in the Yucatan, Baja California, and Baja California Sur, Quintana Roo and Bahía de Banderas, foreign birdwatchers represented 87 percent.

On the subject, Emer García de la Puente, head of the habitat conservation and key species laboratory of the Autonomous University of Baja California Sur (UABCS), Los Cabos academic extension and other academics and researchers, indicated that bird tourism is an activity that It is growing a lot throughout the country and it requires regulation so as not to affect birds and wetlands.

He said that the report “Avitourism with Aquatic and Marine Birds in Mexico” made by Defenders of Wildlife of Mexico, the Autonomous University of BCS, the National School of Higher Studies of Morelia, and Teyeliz AC., Documents that, during 2019, 979,835 Birdwatchers went out to observe aquatic and marine birds in the wetlands of Mexico.

The exponential growth of more than 1,500 percent in the number of bird watchers, mainly in wetland areas, is reaching saturation in several places, which can lead to the affectation of bird populations and their habitats.

The Marietas Islands in Nayarit, Ría Lagartos and Ria Celestún in Yucatán may be reaching saturation of annual visitors, he warned.

“Bird tourism in Mexico is an industry that will continue to grow both in the number of bird watchers and in the economic benefit. This activity should be promoted for the benefit of birds, wetlands and all sectors involved. However, aquatic and marine birds, as well as the wetlands they inhabit, are very fragile and must be protected from disorderly ecotourism, ”said Juan Carlos Cantú, director of programs for Defenders of Wildlife de México.

“Sites such as Guerrero Negro, Alto Golfo and the Colorado River Delta, and Marismas Nacionales are pioneers of the activity due to the spectacles formed by the concentrations of hundreds of thousands of bird species. Bird tourism is an industry with a great economic impact that benefits fishing communities that were in a vulnerable situation and little by little are integrated as providers of ecotourism services.

The conservation of wetlands through bird use is the key to the sustainable development of our country ”, explained the Master of Science Emer García de la Puente from the Autonomous University of Baja California Sur. In Mexico, there are 252 species of aquatic and marine birds considered for bird watching. Of these, 135 species are migratory and nest primarily in the US and Canada.

Many of the aquatic and marine bird species congregate in flocks of tens to hundreds of thousands during migration. Still, others are residents and nest in a colonial way, putting hundreds and even thousands of nests. The latter are very vulnerable to the presence of human beings. 56 species of aquatic and marine birds are classified in some category of risk, and 2 of them have already become extinct.

“In the southeast of Mexico, the observation of aquatic and marine birds is a fundamental factor for various sites located on the coastlines, such as Costa de Oro in Veracruz, Ría Celestún, Ría Lagartos in Yucatán, Laguna de Terminos in Campeche, El Cañón del Sumidero in Chiapas. Unfortunately, aquatic and marine birds face greater difficulties, such as the loss of their habitat due to urban expansion, pollution, erosion of bodies of water and even climate change ”said the Master of Science Gilberto M. González Kuk of the National School of Higher Studies of Morelia and CECFOR 4 CONAFOR.

In Mexico, there are various official Mexican regulations that regulate wildlife observation ecotourism activities such as whales, whale sharks, among others. Although bird tourism, in general, is carried out annually by more than 1,183 million people in Mexico, there is no rule to regulate this activity.

“Bird tourism is a sustainable use that leaves an economic spill of billions of pesos a year. Bird watchers want to see waterfowl, seabirds, parrots, macaws, and raptors. The federal authorities have ignored bird tourism, they do not promote it, much less regulate it. Bird-watching is the perfect activity for the conservation of birds and their habitats that will also benefit rural communities economically ”said María Elena Sánchez, president of Teyeliz, AC

“We urge the authorities of the Ministry of Environment and Natural Resources and the Ministry of Tourism to develop a standard to regulate bird tourism to protect birds and their habitats, as well as to ensure that the economic spill is equitably distributed,” especially in rural areas where birds live ”, the researchers agreed.