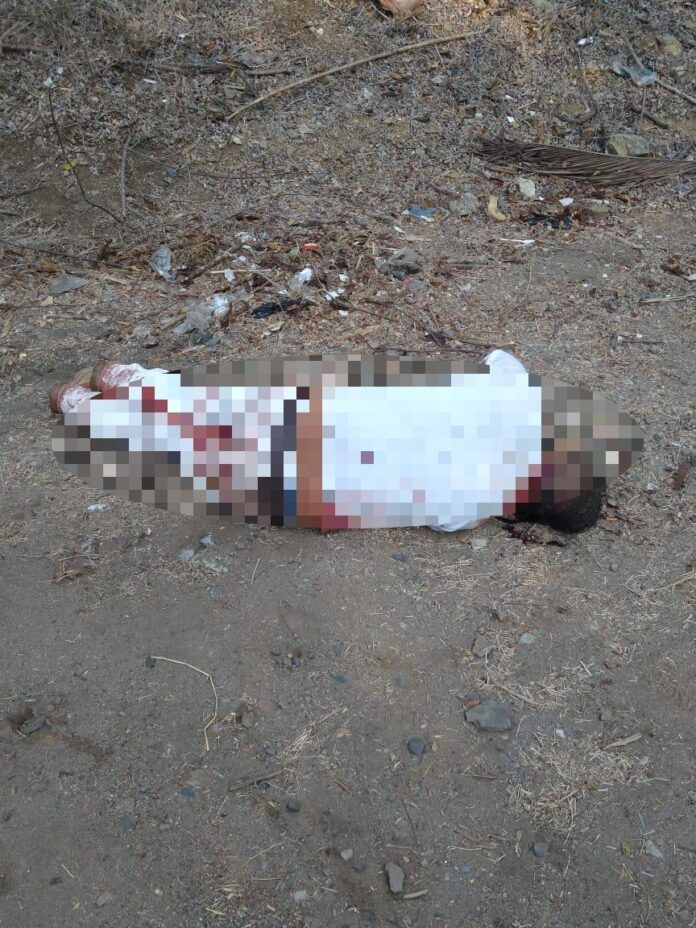 This Saturday morning a local artisan from Puerto Vallarta was found dead, who was in a spot on the old highway that led from La Cruz de Huanacaxtle to Punta de Mita.

The person identified with the name of Bartolo, was lying, in addition to presenting blood spots and had his hands handcuffed.

The report to the C4 in Bahía de Banderas indicated that on said road at the height of the curve known as Curva del Diablo there was a person lying apparently injured.

Immediately, Municipal Police personnel went to the place where they located the corpse of the man, who was wearing white, his hands were handcuffed, and they also found caps of .9 millimeters.

It was in this way that elements of Civil Protection and State Firefighters appeared at the scene who confirmed that the man was lifeless.

In the place was the one who said his name was Ulises, 40 years old, originally from Puerto Vallarta and a craftsman by trade, who is dedicated to selling handicrafts on the beach, who pointed out that the now deceased was his 30-year-old brother Bartolo who since Yesterday he did not arrive at his house and this morning he found him in those conditions.

On Friday afternoon, another execution was recorded in Bahía de Banderas where a young man was shot to death while driving his vehicle on the Riviera Nayarit boulevard in the stretch from Bucerías to Tondoroque.

Regarding the facts, it is known that the now deceased was circulating on the avenue when a white Toyota truck suddenly approached him and he was shot.

Despite the fact that medical assistance arrived quickly, they checked the man who no longer had vital signs.

Personnel from the Public Prosecutor’s Office and SEMEFO took over the removal of the body for transfer to the morgue.

It is important to note that in less than 24 hours there have already been three shootings.

Due to this fact, the avenue was closed, which is causing road chaos , but the vehicle where the now deceased was traveling has already been removed and traffic is returning to normal, in the same way the authorities maintained some filters in search of those responsible.

The now deceased responded to the name of Alfredo Gonzalez , a neighbor of the Ixtapa delegation.

It was minutes before 00:00 hours this Thursday when firearm shots were heard in the El Capomo neighborhood in Mezcales, in the municipality of Bahía de Banderas, Nayarit, which caused alarm among neighbors and dispatchers of a gas station and a convenience store, an unknown subject came to where two young men were in a van and shot them at point-blank range, taking their lives.

Police personnel received the report that gunshots had been heard on Iturbide Street between Francisco Villa and Emilo M. Gonzalez.

Immediately elements of the Municipal Police arrived at the place where they realized that in the parking lot of the Convenience store there was a white van, likewise inside there were two inert bodies, for which the support of an ambulance was requested.

Civil Protection and Firefighters personnel who arrived and after providing first aid indicated that they no longer had vital signs.

The youths apparently received the entire lead discharge accurately; both were shot without having time to defend themselves or escape, as the shots were accurate and targeted areas that, due to their vital importance, made it impossible for them to preserve their lives.

The agents cordoned off the area and reported the Public Ministry agent who arrived and took charge of raising the records.

It became known around these events that the two young men were residents of the El Capomo neighborhood, near where they were shot dead.

This is the fourth murdered in less than 36 hours in the municipality of Bahía de Banderas.