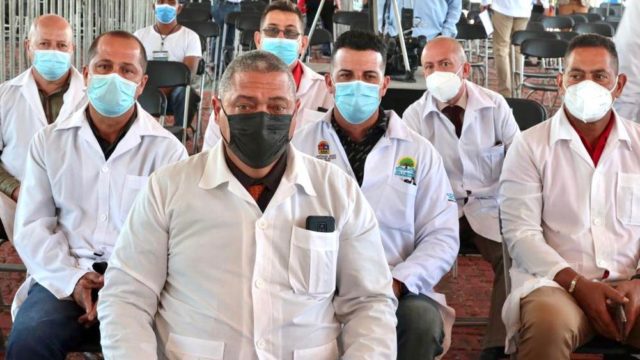 On Saturday, July 23rd, the group of doctors accompanied President Andrés Manuel López Obrador (AMLO) during a Supervision of the Health-Wellness Plan tour in Nayarit.

In a press conference, together with the governor of Nayarit, Miguel Ángel Navarro, the President stressed that the arrival of these doctors will improve the country’s health system, which is totally false in the opinion of many experts, who claim that these Cuban doctors are just part of AMLO’s plan to support the Communist government of that island.

In May, López Obrador reported the hiring of 500 doctors from Cuba that would join the Mexican public health system. While the President has not detailed where these 500 doctors will be distributed, Nayarit media anticipate the first group of 60 will be placed around that state.

“It is not the responsibility of Dr. Navarro (Governor of Nayarit) nor of Dr. (Jorge) Alcocer or Zoé (Robledo),” AMLO said. “It was an instruction that I gave knowing how our adversaries, the conservatives, were going to respond. I made the decision to hire specialist doctors from abroad and doctors from Cuba are going to come,” López Obrador said Saturday.

“Health has nothing to do with ideologies. Health has to do with human rights and if we have to bring doctors from the United States and Russia or Cuba or Japan or France, we will have them here,” AMLO stated.