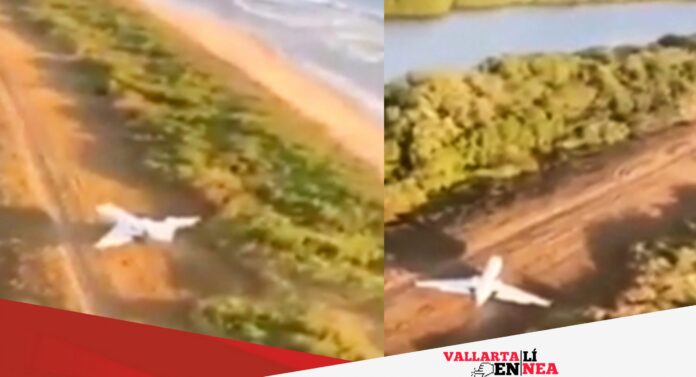 An interesting video has gone viral on YouTube, it is the footage that shows a private jet taking off from a clandestine runway next to a beach, the source that publishes it, the vlog WarLeaks – Military Vlog, identifies the place as Jalisco.

The video was uploaded to the social network 2 weeks ago and has already accumulated more than 1.2 million views, within the video account of this vlog with more than 1.49 million subscribers around the world.

The video has also been posted on the Reddit forum and commenters identify the site as “between the coast of Jalisco and Nayarit” on more than one occasion, even as close to Puerto Vallarta.

Based on the geography, it would be easy to determine that this clandestine runway could be located on the Tomatlán coast, where there are extended sections of totally uninhabited beach, next to large flat fields with totally empty vegetation and crops.

Another geographical similarity is the estuary that can be seen behind the track, very similar to those that abound in the Costa Alegre of Jalisco. The video was captured from a helicopter, presumably from the Mexican Army.

Warleaks titles the video: “Narcojet escapes from the Mexican Army.” Despite this evidence, no federal or state authority has issued any statement.

However, the operation of clandestine aircraft by drug cartels to transport weapons and drugs is well known, there have even been public incidents where Latin American armies shoot them down or capture them.