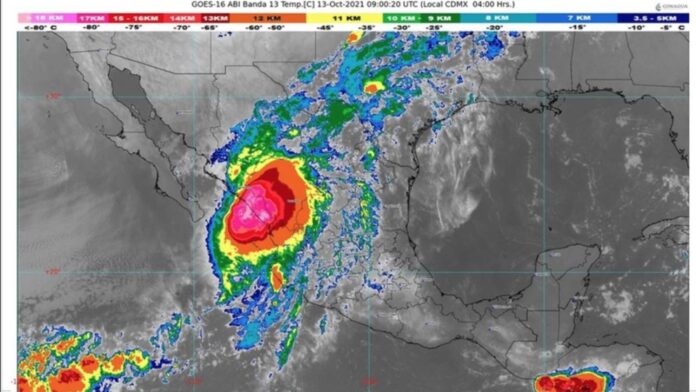 Pamela would hit the west coast of Mexico on Wednesday morning as a force majeure hurricane, which could cause dangerous storm surge and winds when it makes landfall.

It is located approximately 130 kilometers west-southwest of Mazatlán, Sinaloa, and 235 kilometers east of Cabo San Lucas, Baja California Sur, with maximum sustained winds of 120 kilometers per hour (km / h), gusts of 150 km / h. h and displacement towards the northeast at 22 km / h.

The system favors punctual torrential rains of 150 to 250 millimeters (mm) in areas of Durango, Nayarit, and Sinaloa; very strong from 50 to 75 mm in Jalisco sites, as well as strong from 25 to 50 mm in areas of Sonora.

“Pamela is forecast to be a major hurricane when it hits the west-central coast of mainland Mexico,” the NHC said, advising residents to “monitor the progress of this system and make sure they have their hurricane plan in place. place “, warned the National Hurricane Center of the United States (NHC).

The storm was about 130 kilometers southwest of the west-coast Mexican city of Mazatlán in the state of Sinaloa at 0900 GMT Tuesday, the NHC said and was moving northeast about 14 miles. an hour with maximum sustained winds of 120 kilometers per hour.

The Miami-based center said heavy rains could lead to flash floods and landslides in the states of Sinaloa, Durango, and Nayarit.

Overnight, Pamela is expected to pass near the southern tip of the Baja California peninsula before speeding toward Mazatlán.

A group of 16 US citizens were sheltered in shelters in Mazatlán after being stranded at the local airport due to the cancellation of their flights due to bad weather.

The tourists, who were heading to Dallas, Phoenix, and Los Angeles, were transferred to a shelter where they will remain until conditions improve, reported Eloy Ruiz, a local Civil Protection coordinator.

Authorities also toured the periphery and the rural area of ​​the city, where at least 80 neighborhoods are at risk of flooding due to rain, to urge the population to move to shelters authorized by the mayor’s office, added the official.

In Sinaloa, where it is expected to make landfall, a preventive alert was declared due to the proximity of the phenomenon, according to the National Water Commission of Mexico.

North Pacific:  Cloudy sky during the day with torrential rains in Sinaloa, which can generate landslides and floods, and heavy rains in Sonora. Cool atmosphere in the morning with cold temperatures in the Sonora mountains and warm in the afternoon with west and northwest winds of 20 to 30 km / h, gusts of 120 to 150 km / h and waves of 4 to 6 meters, during the morning in coasts of Sinaloa.

Central Pacific:  Cloudy sky. Torrential rains in Nayarit; very strong in Jalisco (northwest and coast), as well as intervals of showers in Colima and Michoacán, all with electric shocks and possible hail fall. The rains can generate landslides and floods. Cool atmosphere in the morning with fog banks and cold temperatures in mountain areas. Warm to hot atmosphere in the afternoon and wind of variable direction from 20 to 35 km / h in the region, in addition to gusts of 80 to 100 km / h and waves of 3 to 5 meters, during the morning on the coast of Nayarit.

South Pacific:  Partly cloudy to cloudy skies during the day with heavy rains and electric shocks in the afternoon in Chiapas, as well as intervals of showers in Guerrero and Oaxaca. Cool in the morning, as well as warm to hot in the afternoon. North and northwest component wind from 20 to 30 km / h.

Gulf of Mexico:  Clear skies in the morning, increased clouds during the afternoon, intervals of showers and electric shocks in areas of Tamaulipas and Veracruz. No rain in Tabasco. A cool morning atmosphere in the region with fog banks and cold temperatures in mountain areas, as well as a warm to hot atmosphere during the afternoon. North component wind from 20 to 35 km / h with gusts of 60 to 70 km / h and possible formation of eddies in Tamaulipas.

Yucatan Peninsula:  Clear sky in the morning, partly cloudy during the afternoon with isolated rains in Quintana Roo. No rain in the rest of the region. Temperate in the morning and hot in the afternoon. Northeast wind between 20 and 35 km / h.

Mesa del Norte:  Cloudy sky with occasional torrential rains in Durango; intense in Coahuila; very strong in Zacatecas (west) and Nuevo León (north); strong in Chihuahua (south) and isolated rains in San Luis Potosí and Aguascalientes. Cool atmosphere at dawn with cold temperatures over the mountains of Chihuahua and Durango. Warm to hot atmosphere in the afternoon. East component wind from 25 to 40 km / h; gusts of 70 to 90 km / h in Durango and Zacatecas, gusts of 60 to 70 km / h in Chihuahua and San Luis Potosí, as well as possible formation of whirlwinds in Coahuila and Nuevo León.

Central Table:  Partly cloudy sky in the morning and cloudy during the afternoon with isolated rains in Guanajuato, Querétaro, Hidalgo and Puebla, all with electric shocks. Fresh morning atmosphere with fog banks and cold temperatures in the high areas of Hidalgo, Tlaxcala and Puebla. Temperate atmosphere in the afternoon and east and northeast wind 15 to 30 km / h. The maximum rains of the last 24 hours (in millimeters) were recorded in:

The maximum temperatures (in ° C) were recorded in:

The National Water Commission, through the National Meteorological Service, will continue to report on the development of these phenomena through the Twitter account @conagua_clima, as well as the internet sites https://smn.conagua.gob.mx and www.conagua .gob.mx

Nayarit will no longer use the Puerto Vallarta Airport, they will bring tourists from Tepic Airport

Restrictions for Nayarit restaurants still continue and affect their survival