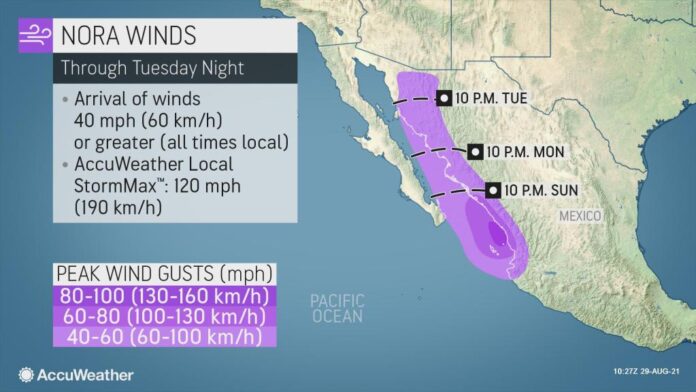 The specialist Juan Espinosa Luna highlights that on Sunday “he will park for hours in Mazatlán and will have erratic behavior; the National Hurricane Center maintains a similar perspective and the SMN indicates that it will be a tropical storm in the afternoon

After making landfall in Jalisco and continuing its displacement through Nayarit, the intensity of ” Nora ” could decrease, however the force of its winds and rains will continue to cause hurricane effects in Nayarit and Sinaloa in the next few hours.

The specialist Juan Espinosa Luna, detailed tonight that when arriving in Nayarit, it will probably assume the category of a tropical storm, however, it will discharge a significant amount of rain.

He emphasizes that with these conditions he could enter Sinaloa through the municipality of Escuinapa around 2:00 in the morning on Sunday and later, at noon, arrive in Mazatlán where “Nora” will park for several hours.

“Much of its rainfall would be practically in the Nayarit area, probably as a tropical storm, also touching southern Sinaloa; In Escuinapa, extreme precautions in the early morning are expected to have these conditions at 2:00 and later have a very erratic behavior; it will move towards the Escuinapa, Rosario and Mazatlán mountains, ”he said.

The Dr. in Applied Geophysics, electrical, electromagnetic, terrestrial and aerial magnetic methods, refractive seismic and global climate change project, indicated that the rains would cover the entire municipality of Mazatlán and its surroundings, so be alert.

“Significant rainfall in that portion of Sinaloa, covering part of La Cruz, but it would definitely be within Sinaloa tomorrow Sunday, it is expected to be at 12:00 noon and later it seems that it will regroup in Mazatlán, at 8 : 00 or 9:00 at night and it is expected that with these conditions it will be parked for a few hours in that position, ”he explained.

He highlighted the “rare” movement that ” Nora ” will register and added to this, towards the north of Sinaloa, in front of Ahome, “an anomaly ” is visualized in formation.

“That very strange movement, it had not been my turn to perceive a movement in this way, it will enter, great concentration in the south zone, Escuinapa, Rosario, Mazatlán tomorrow, but we see that on Sunday we see that it will be at 12:00 great day water concentration; we have a very rare anomaly that is going to appear here in the municipality of Ahome with some rare medium rains, but practically according to this model, it is already low pressure or low stationary pressure and we see a very strange movement of this body that would not be disappearing ”, He added.

Juan Espinosa called on the population to monitor the proportions of these changes since in Mazatlán it would be static for almost 24 hours.

“Be very careful in this area since we expect rain from tomorrow on Sunday at 2:00 or 3:00 in the afternoon or earlier and practically all that area would be concentrating, also Concordia, rainfall throughout the municipality of Mazatlán, is expected enough water. According to this model, it is estimated that on Sunday or early morning the greatest effect will be in Escuinapa ”, he established.

Finally, he said that it is not possible to make a long-term forecast since “it has had a totally erratic movement and outside any parameter that we can calculate.”

The National Hurricane Center and Central Pacific Hurricane Center in its most recent discussion about the hurricane coincides with the Espinosa Luna forecast and highlights that the flight of the fighter plane and microwave images indicate that the center of “Nora” moved over the extreme northwest coast of Jalisco earlier tonight.

“Since then, the hurricane pattern cloud has degraded, but not enough; Dvorak’s latest estimates below hurricane strength. The slight deviation to the right from the predicted trajectory that brought “Nora” inland, at least briefly, highlights the sensitivity of the future system to its exact track. A considerable part of the latest dynamic guidance, including GFS, ECWWG and JWRF models, indicates that “Nora” will move inland tonight or early Sunday morning and dissipate. The three models also indicate that it could be reformed along the Golgo of California in a few days ”, details the document that you can see in full in the following image.

For its part, the National Meteorological Service in its forecast of 9:30 pm, locates the center of the hurricane “NORA” of category 1 on the Saffir-Simpson scale in front of Nayarit; Its extensive circulation causes very strong rains at extraordinary points, strong winds and high waves in the northwestern, western and southern states of the country, as well as Baja California Sur.

In the next few hours, it will continue to skirt the southern coasts of Sinaloa and Nayarit.

National Meteorological Service, the official source of the Government of Mexico, issues the following notice:Synthesis: HURRICANE “NORA” CATEGORY 1, IS LOCATED 15 KM FROM THE COAST OF EL ROBLITO, NAY. WITH OFFSET TO THE NORTH

Satellite image Current situation: The center of  Hurricane “NORA”, category 1 on the Saffir-Simpson scale, is located 15 km from the coast of El Roblito, Nay. Its extensive circulation causes very strong rains at extraordinary points, strong winds and high waves in the northwestern, western and southern states of the country, as well as Baja California Sur. In the next few hours, it will continue to skirt the coasts of Sinaloa.

Pamela will hit between Mazatlán and San Ignacio as a major hurricane, warns NHC