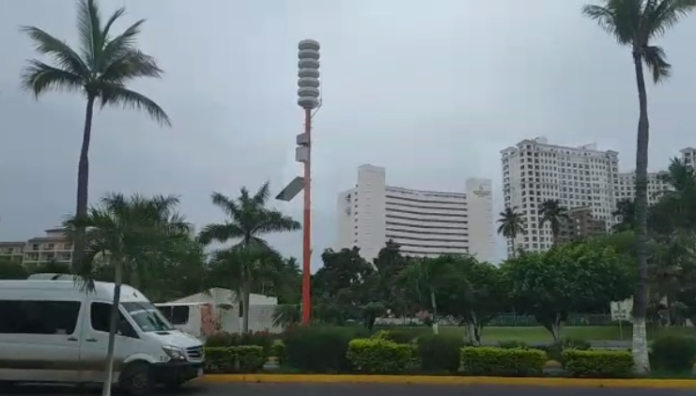 The proximity of the first hurricane of the cyclone season, “Enrique” category 1 on the Saffir-Simpson scale, made for the first time the tsunami warning system on the coast will be activated by a tropical cyclone.

“It will have to be explained that this system is not exclusive to tsunamis are loudspeakers that also serve to alert the population in case of approach of a tropical cyclone,” said Luis Arturo García Pulido, first regional commander in Puerto Vallarta of the State Unit of Civil Protection and Firefighters.

“The system did work very well. Practically all the alarms were activated,” García Publico said, reporting that this is the first time they have been activated by a tropical cyclone.

He said the report indicated that the early warning system was operating at one hundred percent.

Garcia Pulido, says that in addition to the loudspeakers that operated during this Sunday by the proximity of hurricane “Enrique” in Puerto Vallarta, giving warning since the green alert was activated until the night that it passed to the yellow color, they also worked in Cabo Corrientes where they were already on orange alert at night.

He stressed that this system works effectively to provide warnings in communities on the north coast, such as Las Animas, Corrales and Chimo, among others in Cabo Corrientes. “In a number of communities that have these devices and that fortunately – this warning system – is already working one hundred percent,” he said.

Regarding these devices, he said that there are twenty alarms distributed between Puerto Vallarta and Cabo Corrientes: twelve in this city and eight in the neighboring municipality. However, he indicated that of the twelve in this city, two are out of service because they are new antennas that are not yet integrated into the warning system on the coast.