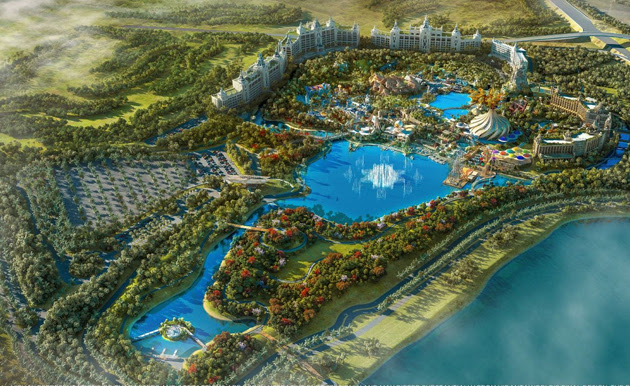 A permanent Cirque du Soleil show and adrenaline-filled games are some of the things that Vidanta World promises, a new theme park that is being built in Nuevo Vallarta, Nayarit.

It is planned to open its doors in the first phase until 2022, but the Vidanta company has already broadly announced how it will be integrated. Here in Destinations, we tell you.

Where could it be

The Vidanta World development is being built along the Ameca river delta, which links Nayarit with the state of Jalisco.

Nuevo Vallarta is very close to the Puerto Vallarta Airport and the homonymous destination.

What will there be

A few years ago it was announced that in the Mexican Pacific there would be a theme park dedicated to Cirque du Soleil. Now we know that Vidanta World will rather be a “three-in-one” complex: it will have an immersive fantasy park, one aquatic and another focused on enjoying nature. Each one will present its own design and style.

The three parks will be connected by the Skydream cable car, which will travel a circuit of approximately 6 kilometers and will make 5 stops. It will also transport visitors from Vidanta hotels to parks.

According to the company, it is the first cable car in the world to be built in a beach resort. It will offer panoramic views of the Bay of Banderas and its VIP cabins will have a glass floor. The first phase that Vidanta World will open will be its immersive fantasy park. This site will be inspired by the jungle that surrounds it; it will have replicas of ancient ruins, a show inside a lake, dining options, and various boutiques.

The Cirque du Soleil show will open later and will have a whole-themed area with acrobatic attractions. The theater where the show will take place will be outdoors and, according to a statement from the circus company published in 2019, it will have a capacity for 600 people. The water park will have attractions dedicated to thrill seekers, but also more family-friendly activities.

To develop Vidanta World, it is working with companies such as Aérophile, which specializes in captive balloons (hot air balloons that rise but are attached to a fixed point), and Intamin, dedicated to adrenaline attractions (designed the 3 most important games in the world). famous park Ferrari World Abu Dhabi, in the United Arab Emirates).

Since 2014 the circus company originally from Quebec, Canada, has mounted a permanent show in Riviera Maya: Joyà. Paying tribute to the nature of the region, this 80-minute play can be accompanied by a themed dinner. It is presented several nights a week at the Vidanta Theater, 40 minutes from Cancun and 25 minutes from Playa del Carmen.

It is the first Cirque du Soleil show to take place outside the United States and involves a gastronomic experience.