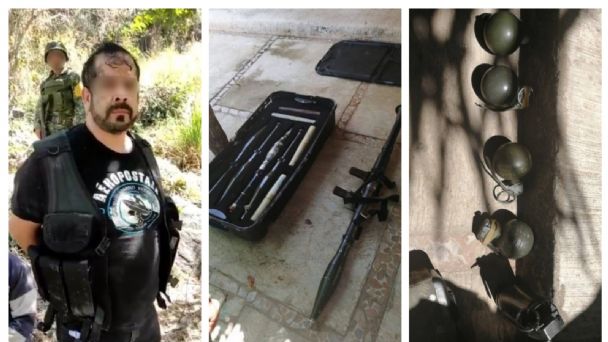 The confrontation in Rincón de Guayabitos between the military and armed civilians was caused by their arrest.

In a video that circulates on social networks, military elements are seen reading their rights.

“We are personnel of the Mexican Army. We are going to put him before the competent authorities, we will respect his life and his human rights, “a National Defense officer tells him.

The arrest led to clashes and drug blockades in the town of Los Ayala, which extended to Rincón de Guayabitos. There were also mobilizations on Federal Highway 200.

As a result of the operation, large-caliber and high-powered weapons were seized, in addition to a Soviet RPG-7 rocket launcher. Four rifles equipped with a grenade launcher were also seized.

Among the insured equipment, two are two SCAR L rifles and one SCAR H, weapons used by the United States special forces , as well as a Minimi 762 machine gun, all of Belgian manufacture.

On the other hand, the press department of the 13th military zone in Tepic informed El Financiero that two other people were also detained.

According to the report, the 43rd Military Battalion was the one that reacted to the attacks by armed civilians.

Governor Antonio Echevarría García assured, in his social networks, that the safety of the local population will be maintained.